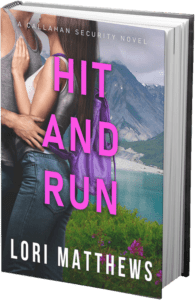 Gage Callahan knew his latest assignment with Callahan Security was going to be a disaster. He traipsed around Europe to locate the computer programmer he was hired to protect only to discover she’s actually a hacker hiding in Alaska. Tensions mount when she narrowly escapes becoming roadkill as a vicious organization comes after her. It will take all his ingenuity to rush her to safety, especially when Gage’s primary objective…get her and the prototype to New York…becomes secondary to protecting his heart from a fatal attraction to the spunky woman.

Dani Pierce is used to working on the dark web but now she is truly scared because deadly trouble has arrived at her front door. The self-reliant hacker knows she’ll need help to survive her contract to build facial recognition software. The aggravating yet handsome man hired to protect her makes it clear he detests her, but that doesn’t stop her from developing feelings for him.

It soon becomes apparent to Gage that Dani’s in deeper than she’ll admit but her answers don’t explain why the deadly gang after her is always one step ahead. It will take his military skills and her hacking know-how to save not only their butts, but the budding love they’ve discovered in the midst of danger.