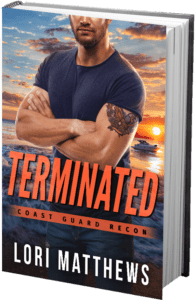 The sole survivor of a deadly IED attack that killed his best friend, Cain, has been recovering physically and mentally for the last year, thanks to his assignment to Team RECON. Now feeling better than he has in months, it only takes the latest op to turn his world upside down.

On a personal vendetta to revenge her brother’s killer in Iraq, Harlow Moretti has made taking down Silverstone Group her life’s mission. But now, the mercenary group is onto her, and a potentially fatal mistake leaves her life hanging in the balance.

Harlow barely escapes a locked and sinking cargo container. But she thanks her lucky stars a bit too soon as she comes face to face with Cain Maddox, the man who’d point-blank refused to help her with her quest. Cain cannot believe that Harlow has spent all this time chasing the murderous thugs. Even though she’s his dead best friend’s sister, and he shouldn’t want her, she’s the one weakness he can’t shake. It’s only a matter of time before Silverstone comes after their cargo, and Cain knows they stop at nothing to retrieve it, including killing Harlow. He’ll protect her at all costs, even if it means losing his heart.