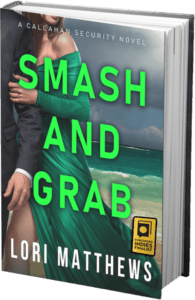 Logan Callahan knows he’s out of his depth. As CEO of Callahan Security, he thrives on balance sheets and bottom lines. But there’s a huge difference between running a company and running for your life. Unfortunately he doesn’t have a choice. The woman he came to the Bahamas to investigate was kidnapped and he was taken right along with her. He knew the sexy lady lawyer was trouble. He just had no idea how much.

Taken again. Lacy Carmichael was not new to the “Kidnap and Ransom” game but usually she managed to talk or fight her way out of it. After all, when your father was one of the largest arms dealers in the world, danger comes with the territory. Since Logan was grabbed with her, she’ll have to reveal all her secrets in order to save their asses.

Logan is hesitant to trust Lacy but a power grab by her father’s enemies removes his choice. If only she wasn’t so damned smart and sexy, staying neutral would be easier. Searching for a way out of the mess, and fighting their mutual attraction to each other, will take all of Logan’s and Lacy’s skills. Unfortunately, deception and betrayal by those they trust the most has changed the rules of the game, and they find themselves battling for their lives and their love.